We had a great time at the UVM Extension Northwest Crops & Soils (NWCS) 2018 Field Day, and were happy to sponsor speaker and farmer Blake Vince for the event!

The day began with a tour around Borderview Research Farm where members of the NWCS team explained the various research trials going on, presented some data they ahve collected, and interpreted what that data means for farmers when choosing crop varieties and making management decisions.  Attendees then enjoyed a delicious BBQ lunch and the Tasting Tent!  During the final hour and a half, attendees could choose an afternoon session to go to.  The afternoon sessions were on healthy soil (speaker: Blake Vince), barley and hops, perennial forages, hemp irrigation, and pollinators.

In this afternoon session the group discussed soil health, cover crops and no-till. 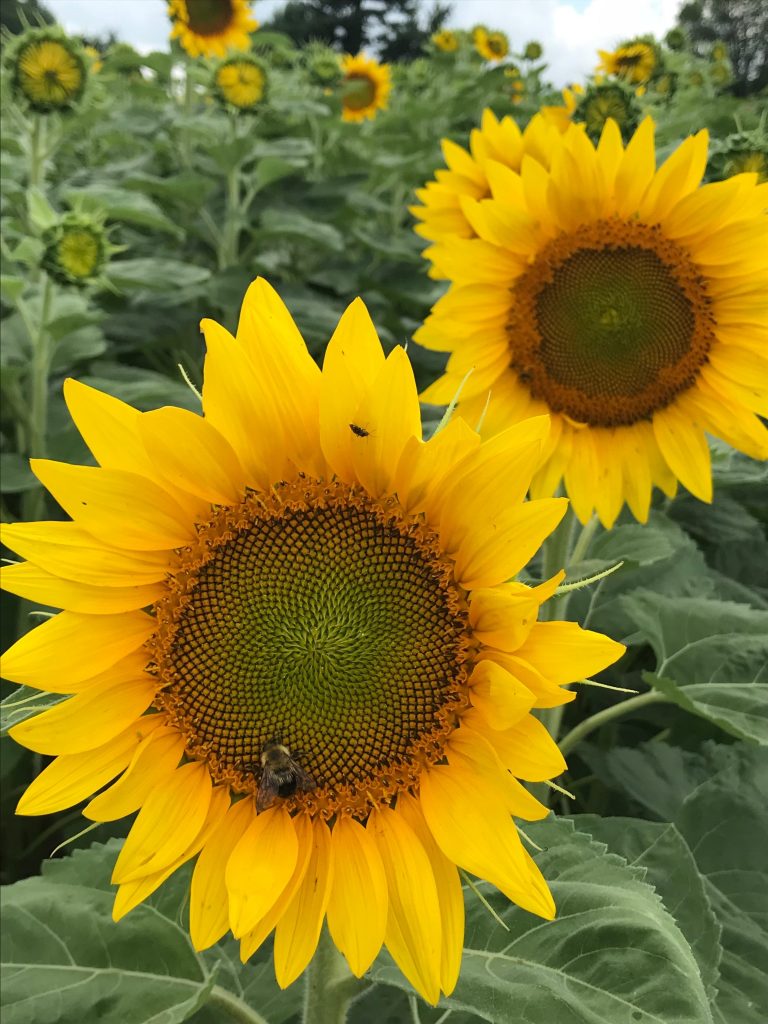 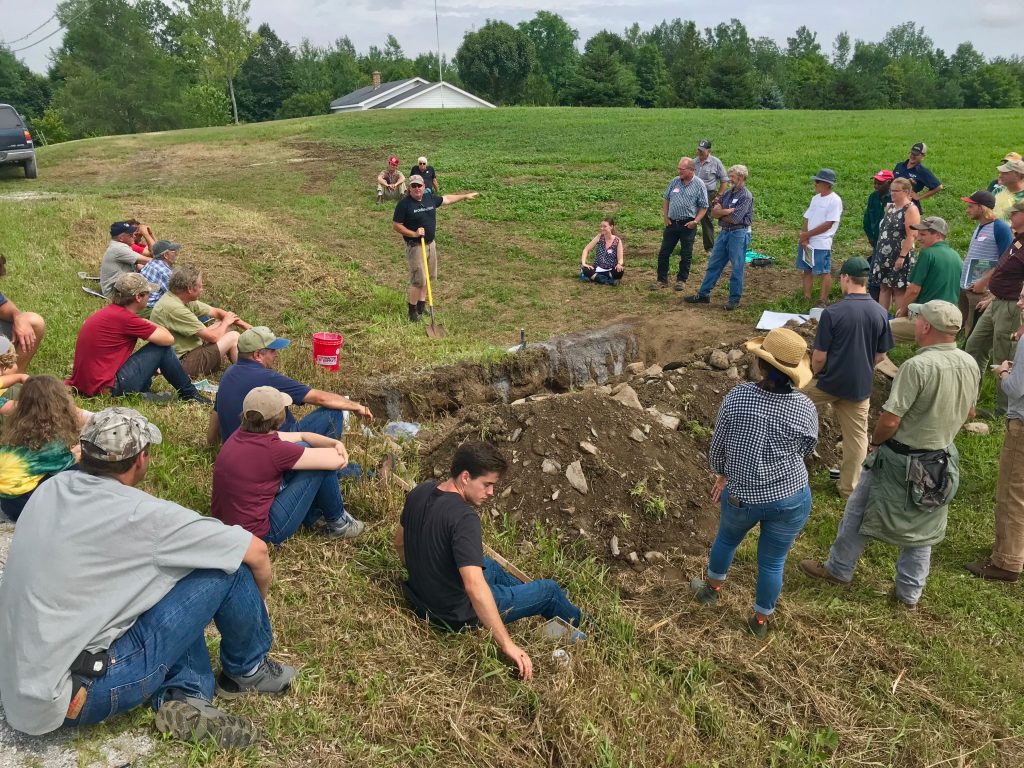 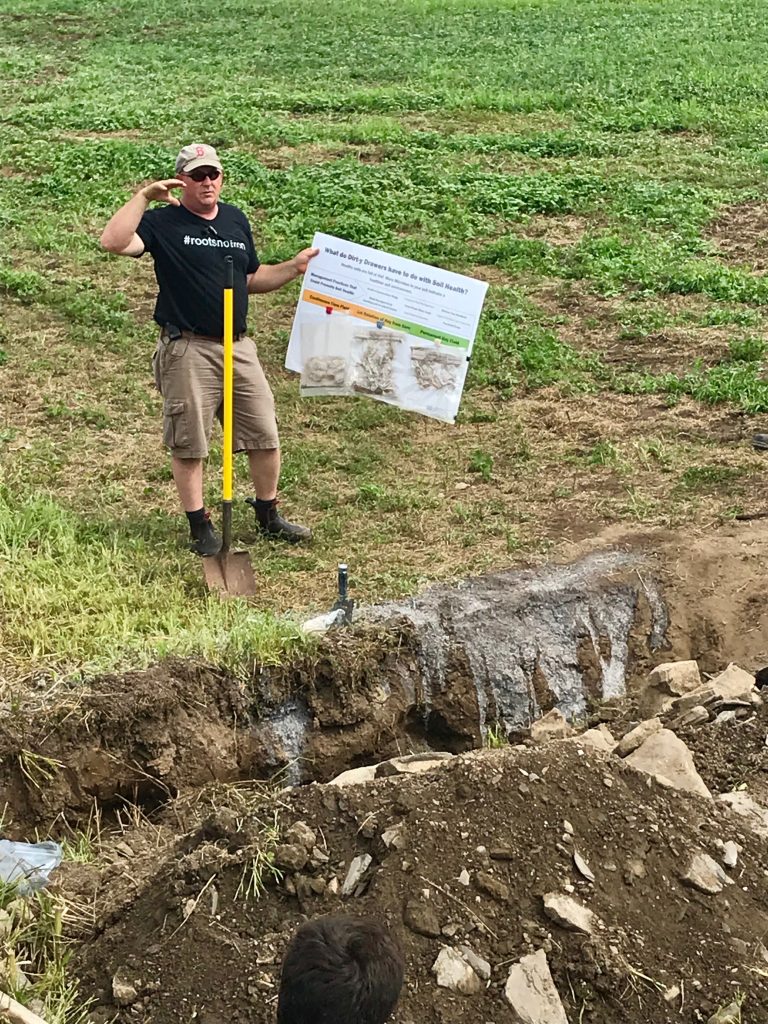 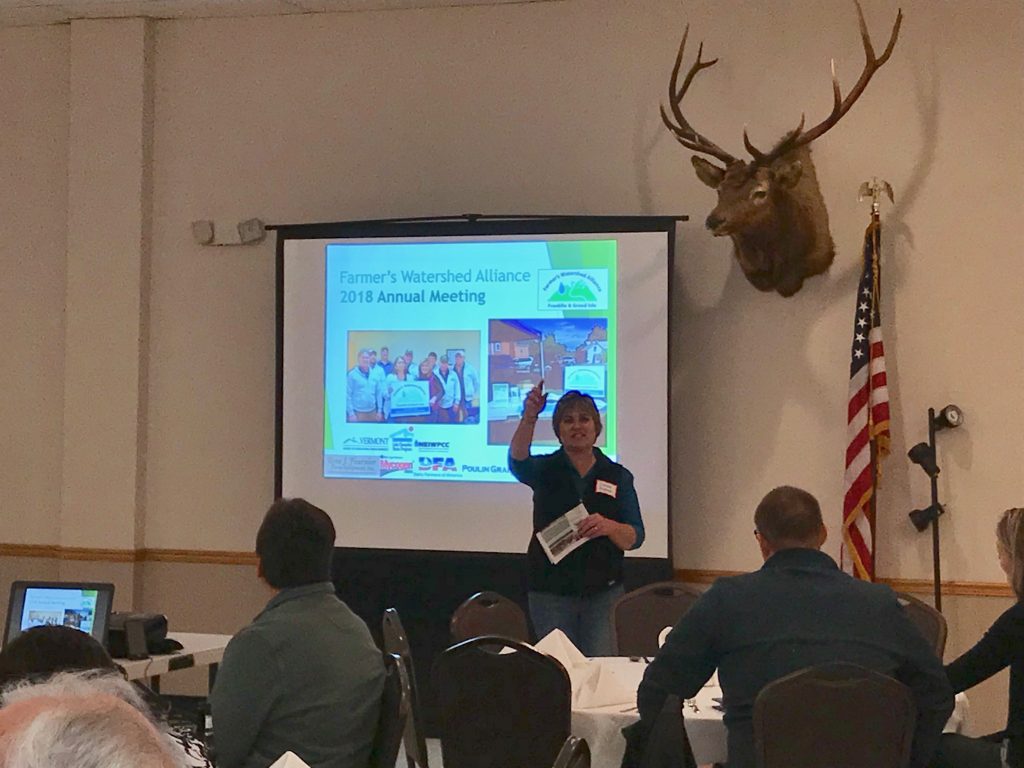 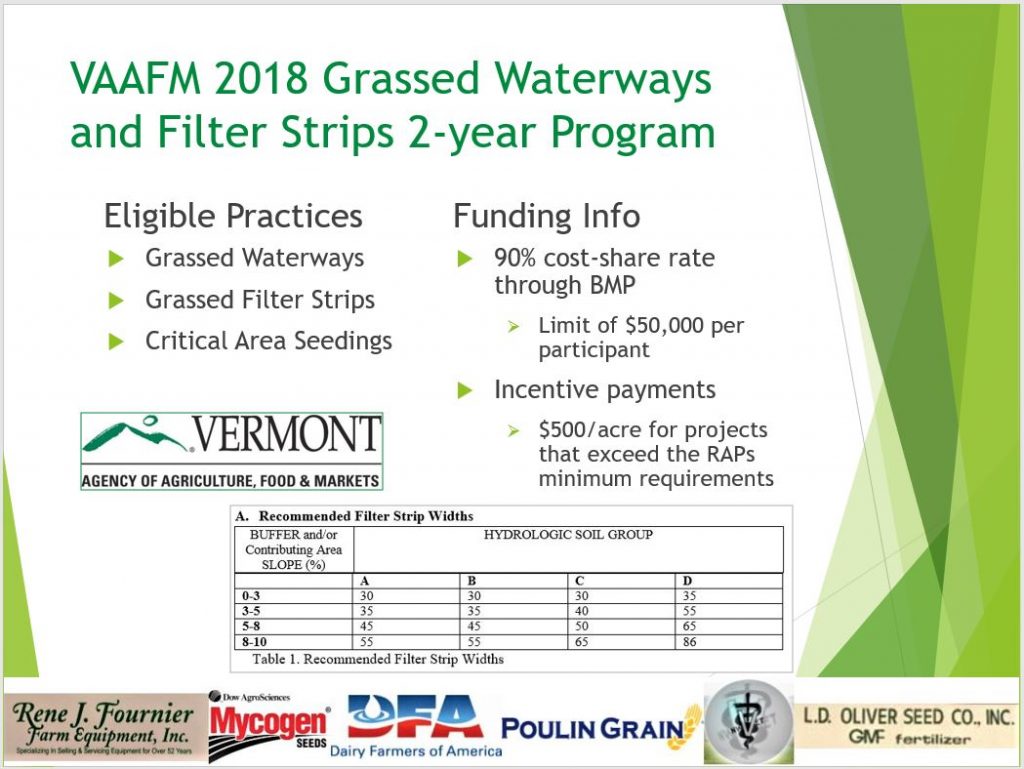 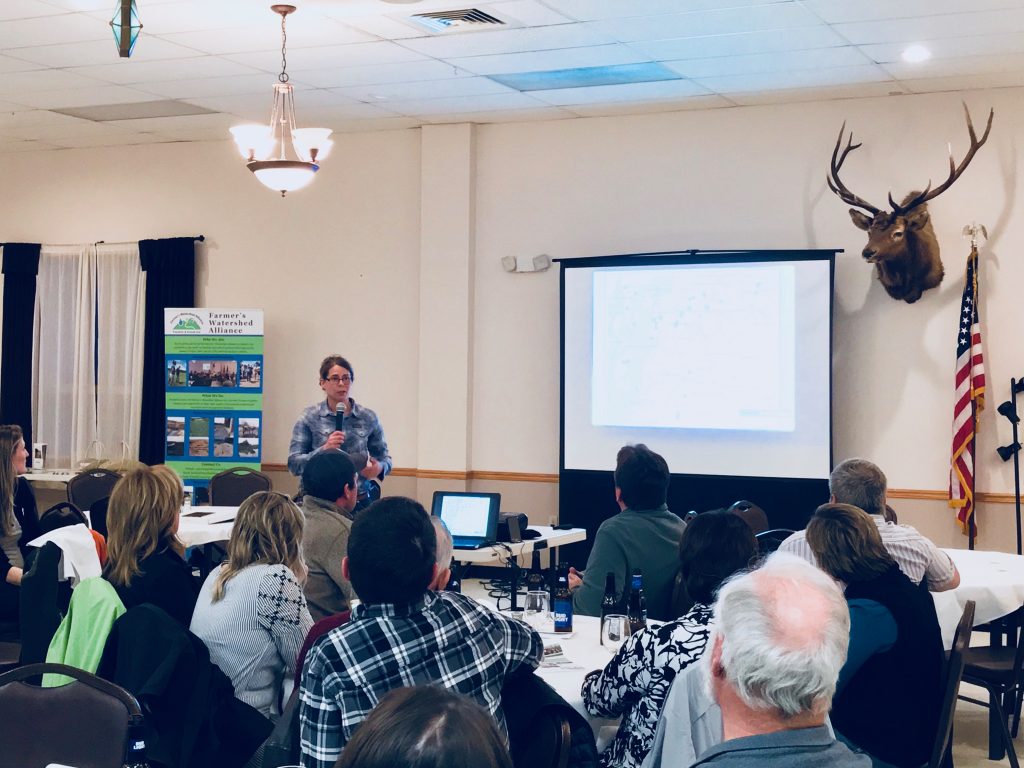 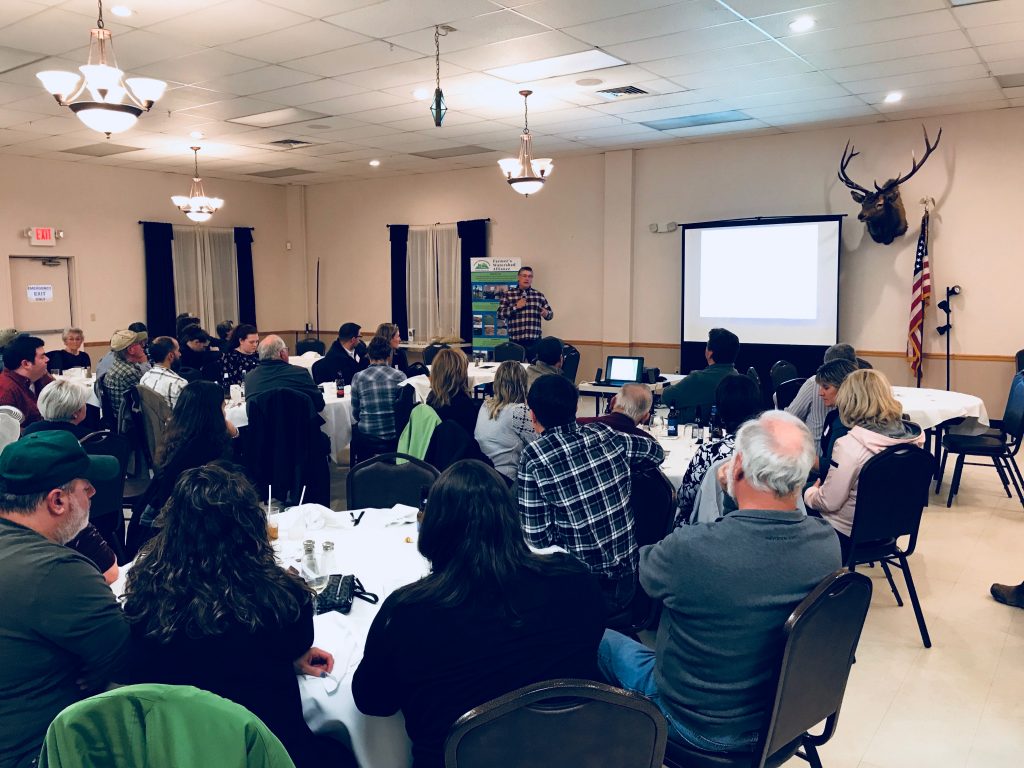 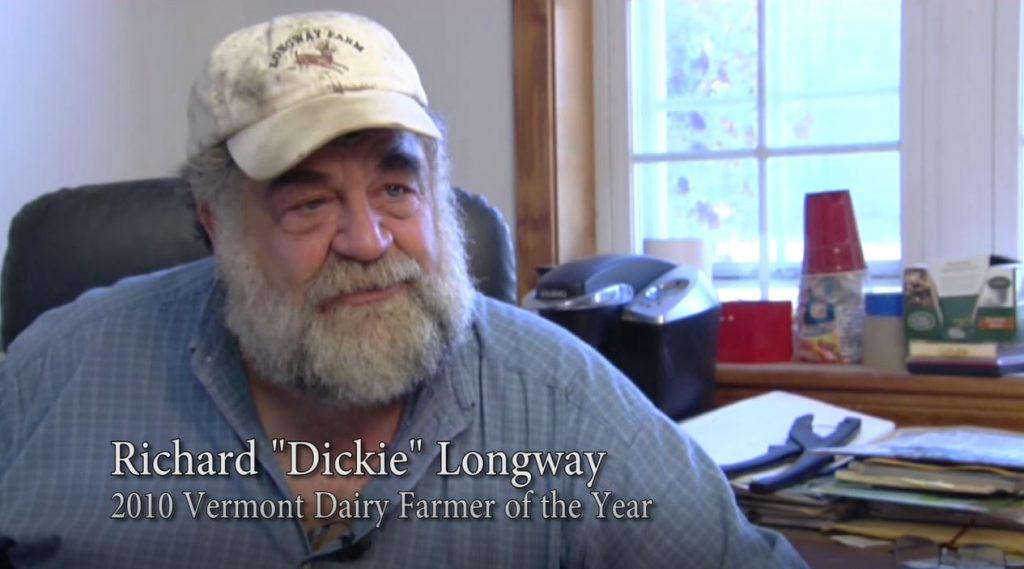 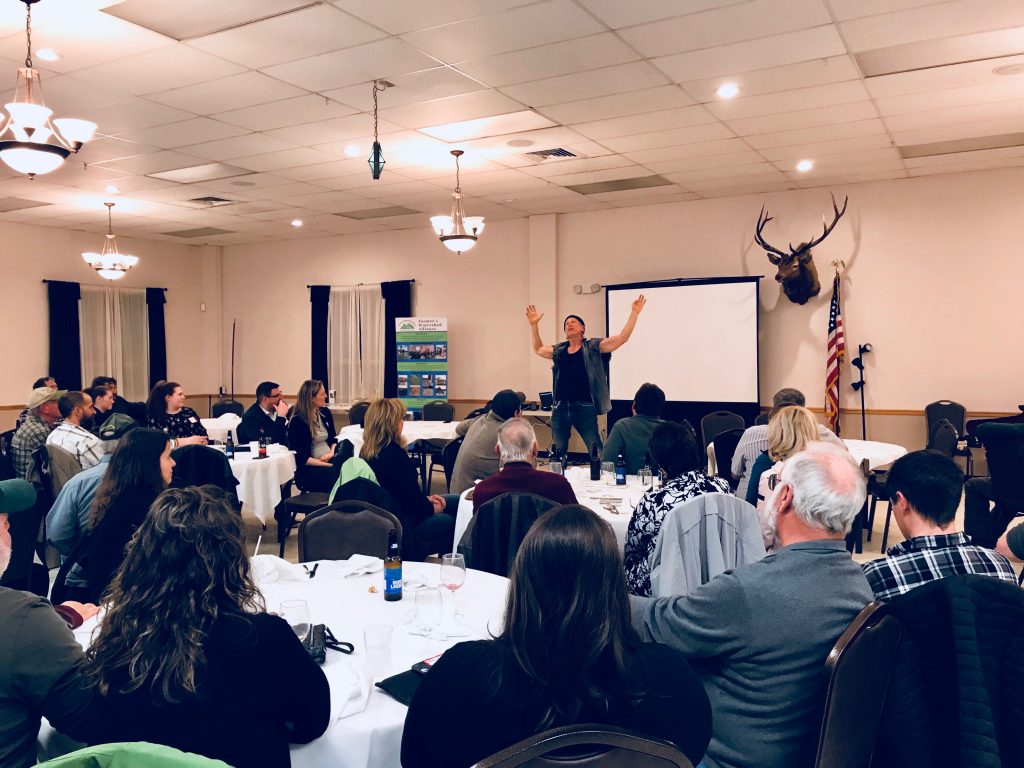 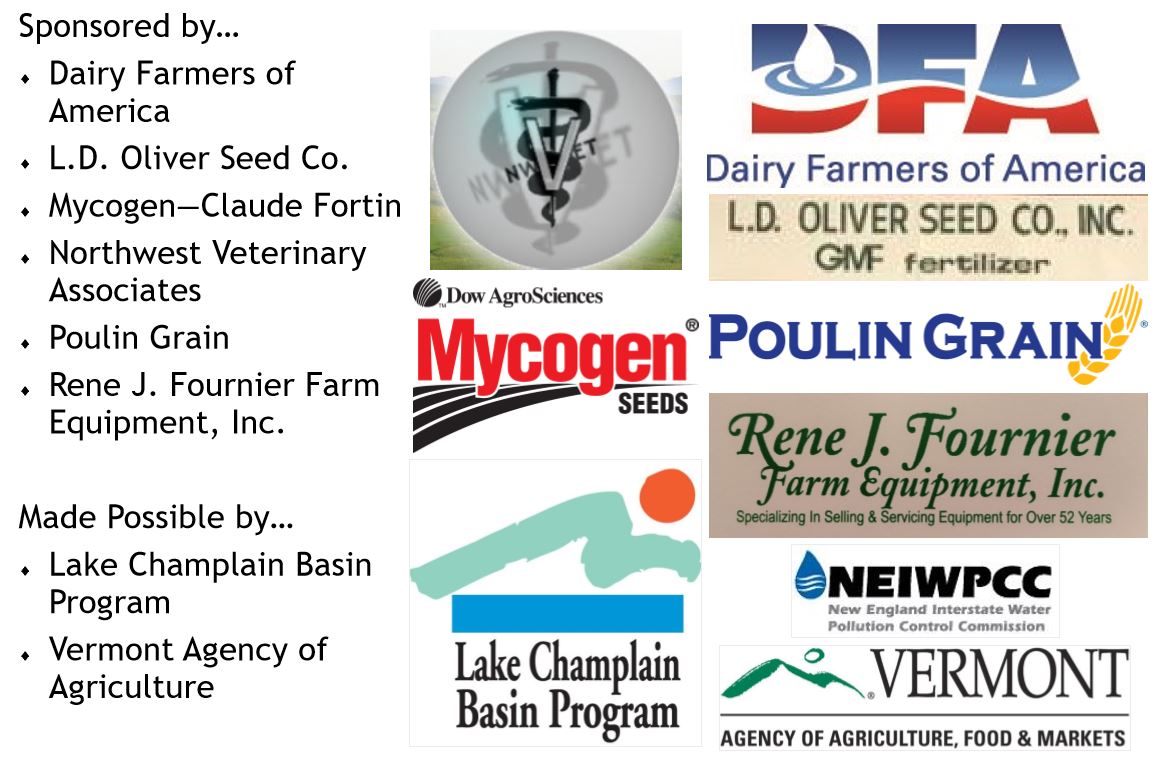 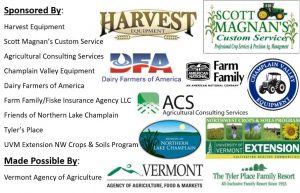 The Farmer’s Watershed Alliance hosted our first ever Comprehensive Precision Agriculture Forum on Friday, January 19th at the American Legion in St. Albans!  There were 60+ attendees comprised of farmers, custom operators, government officials, members of fellow organizations, and community members.  This event showcased the latest technology being used to plant seeds, fertilize fields, apply manure, harvest crops, and feed animals with a high degree of  accuracy while recording valuable data which can be used to manage impacts on natural resources while maximizing return on investment.  Precision agriculture technology is relatively new and underutilized on Vermont farms.  Collecting this data helps farmers and stakeholders make better and more precise plans for farmers and water quality, with the goal of conservation. The presentations were directed at meeting water quality regulations and improving farm profit through precision agriculture management.

We heard from both local and regional experts!  The day began with a ‘Precision Ag 101’ presentation from Erick Haas of Cazenovia Equipment Co. in NY.  His presentation highlighted different technologies through each cropping practice; tillage, planting, crop care, harvest, and data management – as well as the economic value of these technologies.  Next up was Dean James of Cotner Farms in PA, he is the Vice President of the Pennsylvania No-Till Alliance.  His presentation focused on Cotner Farms’ story.  They have roughly 30 years of experience collecting, interpreting, and applying reliable data through informed decision making and risk taking.

After a brief lunch break catered by Dairy Center, we spent the afternoon with a series of shorter presentations.  Savanna Crossman of Advanced Ag Alliance, NY presented on an ongoing project, ‘Optimizing Variable Rate Seeding in NYS’.   Next we heard from four of our own FWA Board Members!  Scott Magnan of Scott Magnan’s Custom Service presented on ‘Precision Manure Management’ and showed the attendees an interactive view of an AgLeader GPS display as if you were in the tractor on a field!  Tim Magnant of Bridgeman View Farm presented on his experience with precision ag from a small farm perspective, Larry Gervais of Gervais Family Farm presented on precision ag from a large farm perspective, Steve Hardy of L.D. Oliver Seed Co. presented on precision ag from a custom operator’s perspective, and Jeff Sanders of UVM Extension presented on equipment/funding available in Vermont.  Throughout the day informal Q&A’s were prompted and encouraged which gave attendees an opportunity to ask questions and discuss what they learned from the presentations.

We would like to thank our sponsors, and everyone who came out and helped make the day a fun and informative experience!  We hope to continue and expand this forum in the years to come.  If you would like more information or have any questions, please do not hesitate to connect with us via email at FarmersWatershedAllianceNW@gmail.com! 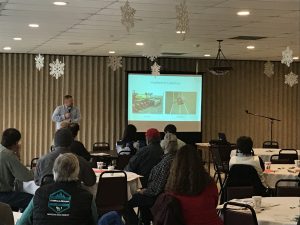 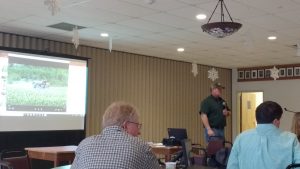 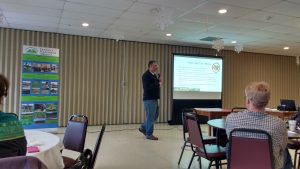 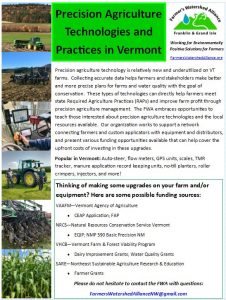 Thursday, September 7th, 2017 was the Conservation Practices on Farms in St. Albans Bay bus tour!  This event was a hosted by the Farmers Watershed Alliance, UVM Extension NW Crops & Soils Team, and the USDA NRCS.  There were approximately 30 attendees comprised of farmers, agency officials, community members, and local organization members.

The bus boarded at the UVM Extension Office in St. Albans.  The tour highlighted conservation agronomic practices being done on various sites around St. Albans Bay.  See some of the highlights below:

This year’s topics included conservation tillage practices such as no-till corn and interseeded cover crops, soil health, and precision agriculture.  Please see some of the highlights below:

And of course, a big thank you to everyone who joined us for an evening of sponsorship by Cargill, Oliver Seed, Fiske Insurance Agency, Northwest Veterinary Associates, St. Albans Coop, Tractor Supply, Harvest Equipment, and Claude Fortin!

Below are some highlights from the annual meeting.

“We extend our congratulations and gratitude to this year’s Environmental Merit Award winners, who are helping to ensure a cleaner environment and healthier communities here in New England,” said Curt Spalding, regional administrator of EPA’s New England office. “In addition to iconic natural beauty and vibrant communities, New England is fortunate to have citizens who care deeply about the environment we share.”

The 2014 Environmental Merit Awards program was dedicated to Ira Leighton, former deputy regional administrator for EPA New England’s office who died in 2013 after 41 years of service to EPA.

The Environmental Merit Awards, which are given to people who have already taken action, are awarded in the categories of individual; business (including professional organizations); local, state or federal government; and environmental, community, academia or nonprofit organization. Also, each year EPA presents lifetime achievement awards for individuals. The Environmental Merit Award Winners from Vermont listed by category are:

The Farmers’ Watershed Alliance is a non-profit, dairy farmer-based organization in northern Vermont’s Franklin and Grand Isle counties.  The Alliance was established, in collaboration with the University of Vermont Extension, to promote good environmental stewardship practices and improve water quality in the Lake Champlain Basin.  The Alliance is a wonderful example of the power of peer-to-peer networks.  Its founders understood that farmers are more likely to accept help and advice, and sometimes a challenge, from their fellow farmers.   Dairy farmers continually face fluctuating milk prices, increasing fuel and fertilizer costs, and expensive technologies and management practices to minimize pollution problems coming from farm production areas and fields.  This organization is helping to bridge the gap between farmers wanting to do the right thing to prevent impacts to water quality but feeling uncertain about where to turn to for education, technical assistance, and financial resources.  The Alliance shares information and uses demonstration projects to show farmers how they can address water quality problems.  It can help farmers identify environmental risks on their farm and develop an action plan specific to those risks. The Alliance helps organize training sessions with the University of Vermont Extension and engages in discussions about water quality challenges and opportunities with federal and state agencies.

The Farmers’ Watershed Alliance’s success in farmer-to-farmer collaboration has led to the formation of the Champlain Valley Farmers Coalition, a sister organization, made up of farmers in the middle and southern portions of Lake Champlain Basin, interested in promoting sustainable agricultural practices.  These networks are playing an important role in shaping Vermont’s plans to restore Lake Champlain.

Pixley Tyler Hill and Ted Tyler Highgate Springs, Vermont Pixley Tyler Hill and her brother Ted Tyler are co-owners of the Tyler Place Family Resort in Highgate Springs, north of Burlington on Lake Champlain.  The resort’s history spans six generations from an 1800’s tenting community to the family destination of today.  Generations of visitors first learned the beauty of Lake Champlain with the Tyler family. Pixley and Ted are also well known as fierce and tenacious advocates for protecting Lake Champlain from nonpoint sources of pollution.  Pixley is the founder of the influential watershed organization Friends of Northern Lake Champlain, formerly named Friends of Missisquoi Bay. Pixley and Ted’s commitment to Lake Champlain extends beyond the north lake and Vermont, as they have both served as a long-time member of the Lake Champlain Committee which serves Vermont and New York. Ted served for nearly a decade on the Vermont Citizens Advisory Committee on the Future of Lake Champlain, a governor appointed committee tasked with crafting annual recommendations for lake protection.  When Ted’s turn was over, Vermont Governor Shumlin appointed Pixley to the seat he long-held by her brother. Perhaps, one of the most epic enjoyable events Pixley is known for is the Annual Tyler Place Event.  For the past 10 years, the Tyler family has generously and graciously hosted an annual dinner at their own expense for hundreds of lake advocates in the northern lake from Vermont, New York and Quebec to discuss lake issues with legislators, researchers, citizen advocates, shoreline landowners, and many more.  The Vermont Governor has often attended these events.

It all started with a pilot project within the Vermont Public Interest Research Group.  VPIRG Energy was created to make it easy and affordable for Vermonters yearning for sustainable energy sources for themselves.  Within a year they helped 300 families to go solar. They knew they had a business model that worked but also realized that to scale it up to serve many more Vermonters they would need a separate entity and investment capital, and so SunCommon was born in early 2012.  Their mission: to tear down the barriers that made renewable energy inaccessible and repower Vermont communities, one home, school and business at a time.

In two short years SunCommon has grown to become Vermont’s largest residential solar business, helping over 700 Vermont homeowners to go solar. SunCommon’s commitment to positive environmental impact runs throughout its business process. Its headquarters are in The Energy Mill, Vermont’s largest “net zero” office building. SunCommon is also a pioneering Benefit Corporation, with a legal charter that directs them to attend to the triple bottom line of people, planet and profit. Benefit Corporations put their investors, employees,  and neighbors  on notice that while they intend to make a profit so that they can grow their business, they also will do right by their workers, the communities in which they operate and the habitats that sustain them.

Recently, 92 companies worldwide were recognized for creating the most positive overall social and environmental impact by the nonprofit B Lab with the release of the third annual B Corp Best for the World list.  The list honors businesses that earned an overall score in the top 10% of all Certified B Corporations on the B Impact Assessment, a rigorous and comprehensive assessment of a company’s impact on its workers, community and the environment.

The award went to Ken Kimmell, who worked at the Massachusetts Department of Environmental Protection from 2011 to March 2014 and before that as General Counsel at the Massachusetts Executive Office of Environmental Affairs from 2007 through 2011. During that time, Kimmell demonstrated a stellar record protecting the environment, proactively addressing climate change, promoting sustainability and innovation, and advancing clean energy technology at the state, regional, and local levels.